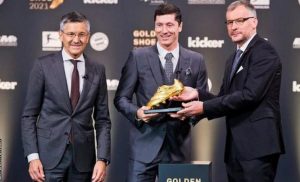 The Polish striker’s has received the 2020-21 European Golden Shoe, as he scored 41 Bundesliga goals for Bayern Munich.

Lewandowski, 33, is only the second Germany-based player to win it, after Bayern legend Gerd Muller in 1971-72.

The Polish striker’s tally last season was the highest since Cristiano Ronaldo claimed the award in 2015 with Real Madrid after netting 48 goals.

The award has been won six times previously by Messi, with Ciro Immobile and Luis Suarez also finishing in top spot.

“I dedicate this award to all the people who are by my side every day.”

“I’d like to thank my family, my teammates, the coaching staff and the whole of FC Bayern.

I couldn’t win titles like these without their support,”

“In sport, like in life, it’s crucial that you value each other, support each other,

are always fair with each other and try to be a role model for others.

I’m very happy with what we’ve achieved together as a team.”