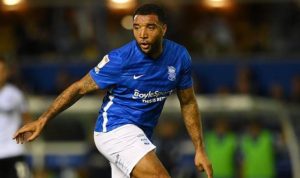 The Birmingham City striker has urged all professional footballers to report every instance of racism to football’s authorities and to the police so that the sheer volume of cases cannot be ignored by the government and social media companies.

Deeney said the discrimination, which has involved his partner and children, has forced him to consider retirement.

“In the grounds it is borderline between what is classed as banter and hateful crime,”

“On social media it is huge. Personally I have to report 30 to 40 messages a day.”

Deeney, who joined Birmingham in August after his 11-year stint at Watford ended.

“That might be targeted at me, my partner and my kids, no-one is off limits.

“As a parent, you want to protect your kids, you don’t want to put them in harm’s way.

That makes me think ‘do you really want to do this any more?’.”

Deeney talked about his plight at an education session on hate crime in football, run by West Midlands Police.

“It’s a bit disappointing that, in the 21st century, that’s what we’re still talking about.

I think it highlights that there is still work to be done.

“There is room for improvement.”

and said he wanted to empower players by explaining what constitutes a hate crime and how they can report abuse.

Since starting the role in January, he has dealt with 84 reported incidents, the vast majority of which relate to race.

One of those investigations resulted in the recent conviction of a football fan,

taking matters to court, hoping that there will be sentences that reflect the crimes that are being committed.

“That will send a clear message to players and the community that when reports come into the police they’ll be taken seriously.”