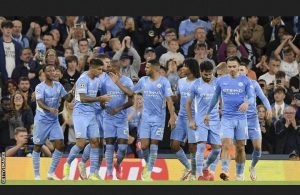 Former Barcelona coach says he will not apologise for calling on more Manchester City fans to attend their Premier League game with Southampton.

Pep Guardiola said “he would like more people” at the Etihad Stadium for the visit of the Saints on Saturday.

While  the club’s fans are criticise him due to his plea.

Guardiola has insisted his comments were misinterpreted.

“Did I say after the game that I was disappointed that the stadium was not full?”

I am not going to apologise.

I know how difficult last season was, and we make an approach to do something together on Saturday.

“It doesn’t matter how many come, I enjoy them.

After five seasons they misunderstand me. I won’t apologise.”

Attendances for City’s Champions League games at home have tended to be lower than those for Premier League matches.

The Etihad Stadium capacity is about 55,000 and there was a crowd of 38,062 against RB Leipzig on Wednesday, with the away section virtually empty.

However, the attendance for City’s first two home league games of the season against Norwich (51,437) and Arsenal (52,276) were close to capacity.

‘If it’s a problem for fans, I will step aside’

On Thursday, a leading City supporters group labelled Guardiola‘s comments after the Leipzig game “disappointing and uncalled for”.

“It’s not factual, our attendances are generally excellent,”

“He [Guardiola] doesn’t understand the difficulties that some people might have getting to a game on a Wednesday evening at 8pm.”

However, Guardiola passionately argued that he would never criticise City fans for being unable to attend games.

“I am entirely grateful for the support that we had against Leipzig,”

The 50-year-old, who celebrated his 300th game in charge with a stylish 6-3 win over the Bundesliga side in their Champions League opener. Added:

“I always say if guys want to come we will be incredibly grateful.

Because, I know how difficult the game will be and I know we need our people.

“I never sit here and ask why people don’t come. If you can’t come then don’t.

“If it’s a problem for fans, I will step aside. From day one, I do my best.

I like to play at the Etihad with my fans…

my intentions are to be part of something, to do it together.”