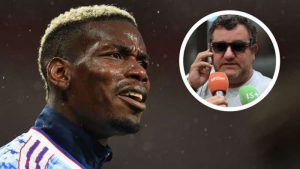 Mino Raiola has said his client Paul Pogba could make a return to Juventus in the summer.

Pogba’s contract with Manchester United is set to expire at the end of the season.

And the star midfielder has yet to agree terms on a new deal.

His agent said that he could return to Juve, where he starred between 2012 and 2016.

“Paul Pogba is out of contract in June, so we’ll talk with Manchester and we’ll see what happens,”.

“Turin is still in his heart. There’s a chance that Pogba will return to Juventus, but it also depends on Juventus.”

“Paul is unhappy with Man Utd as he is no longer able to express himself in the way that he would like and as he is expected to.

Paul needs a new team, a change of air.”