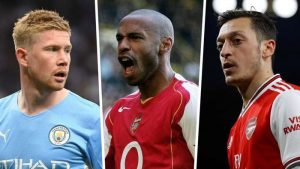 Thierry Henry, Kevin De Bruyne and Mesut Ozil are on top of  the list for most Premier League assists. But, who is toping the chat?

Many goals wouldn’t be scored if not for the players providing the crucial assists.

Goal-scorers tend to get most of the attention during matches.

But, a good assist should never be overlooked.

So which player holds the record for providing the most Premier League assists in a single campaign? Sportdaylight takes a look.

Most assist in a season:

The record of most Premier League assists in a single season is shared by Thierry Henry and Kevin De Bruyne, who both tallied 20.

Henry racked up his incredible assist tally playing for Arsenal during the 2002-03 season.

Read Also: ‘Turin Is Still In His Heart’ Raiola Predicts Pogba Could Returns To Juventus

They are followed by former Arsenal midfielder Mesut Ozil in third place, who had 19 assists to his name during the 2015-16 season.

Then comes former Chelsea duo Frank Lampard and Cesc Fabregas plus De Bruyne again, all on 18 assists each.

Fabregas also appears on the list twice, his 17 assists for Arsenal in 2007-08 ranking him in seventh place.

Most Premier League assists in a season full list

Who has the most assists in Premier League history?

Ryan Giggs is the current record-holder for most assists in Premier League history, with 162 during his extensive career at Old Trafford.

He is followed by Fabregas, who provided a total of 111 assists during his time playing for both the Gunners and Chelsea – but he is still a whopping 51 behind Giggs.

Wayne Rooney comes in third with 103 assists, with Lampard shortly behind on 102.