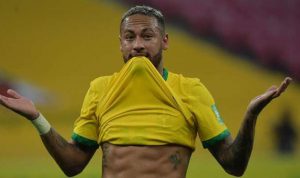 The 29yrs old  reveals he still does not get the respect he deserves.

Paris Saint-Germain star has asked for respect from his fellow Brazilians,

after breaking a national team record against Peru on Thursday.

when he struck in the 2-0 win in Recife, while he also set up the other goal.

Neymar’s tally in the preliminary rounds of the tournament now stands at 12,

putting him above Brazil greats Romario, Zico and Ronaldo.

READ Also: ‘International Break Is Over’ Back To Premier League; Match Day 4 Head2Head

“Obviously, the team is the most important.

I’m very happy to be the top scorer in the qualifiers, the most assists for the national team and soon,

if all goes well, it will be an honour to pass Pele as the all-time top scorer.

“I don’t know anymore what I have to do for people to respect me.

This is normal, it’s been a long time. Reporters, commentators, others too.

“Sometimes I don’t even like to talk in interviews anymore,

but at an important moment I come to show up.

“I leave it to the guys to think a little bit.”

Neymar’s comments come days after he was criticised for looking overweight,

There were claims he was out of shape as they beat Chile 1-0 last week,

but the 29-year-old laughed off the claims, saying the shirt he was wearing was too big.

“The shirt was size [large], I’m at the right weight. Next game I’ll order an M,” he posted on Instagram .

The former Santos and Barcelona hero is now his country’s second top scorer of all time in official matches.

He has 69 goals to his name for Brazil and is edging ever closer to matching icon Pele, who finished his career with 77.