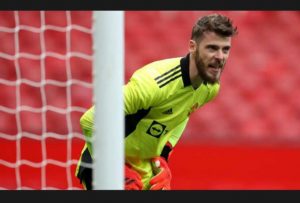 David De Gea gets set to compete with Dean Henderson for the starting role at Old Trafford this season
Manchester United goalkeeper David De Gea has marked his 10-year anniversary at the club by saying he plans on staying at Old Trafford for many more years.
De Gea joined United from Atletico Madrid in 2011 and has gone on to become one of the club’s all-time top goalkeepers, making 441 appearances thus far.

Though there has been some speculation that De Gea could make way for Dean Henderson as United’s starter, the Spaniard does not sound like a man planning on leaving any time soon.

“It’s been a lot of years at the club and a great source of pride for me to have been able to play for a club like Manchester United for so many seasons now,” De Gea told the club’s official website. “But you have to live in the present, I think I still have a lot of years ahead of me at the club, I’m excited about that, feeling strong and I’m very keen to do well.

“I feel great in myself, high in confidence and I think it should be – and has to be – an important season for all of us.”

After impressing on loan at Sheffield United in 2019-20, Henderson returned to Old Trafford last term and made progress toward becoming the club’s No 1.

The 24-year-old started last season as second choice behind De Gea but for the last few months of the campaign he established himself as the starter in the league, while De Gea had to settle for playing in the Europa League.
However Henderson suffered a hip injury this summer that forced him out of England’s Euro 2020 squad, and has recently been suffering from prolonged fatigue after contracting Covid-19.

De Gea, is on standby to start United’s Premier League first match against Leeds on Saturday.