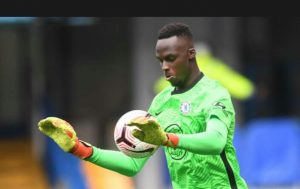 Chelsea first choice goalkeeper shared his football journey and disclosed how he detested standing between the goalposts earlier in his career
Senegal international and Chelsea star Edouard Mendy has revealed that he doesnt want to be a goalkeeper.
In a chat with Uefa website ahead of Wednesday’s Super League cracker against Villareal in Belfast, the African opened up on how he hated playing as a keeper.

“I didn’t always want to be a goalkeeper, but I didn’t have much of a future further up the pitch,” he said.

“I was asked to go in goal, and everything happened naturally after that. I’ve experienced all the divisions in France, from the sixth-tier to Ligue 1.

“In between, there was a period where I was unemployed for a year, aged 22.

“Having never been professional, it’s difficult to then become a professional footballer, but I worked during that year, I worked twice as hard as the others.

“I had luck on my side and that thankfully paid off. I had the chance to sign for Olympique de Marseille. And I just went up from there.”

Mendy played a key role in Chelsea’s Champions League success – featuring in 12 games and not conceding a goal on nine occasions – a feat that saw him equal the tournament’s cleansheet record.
Only Santiago Canizares (Valencia in 2000-01) and Keylor Navas (Real Madrid in 2015-16) have ever reached that number in a single campaign, meaning the African star is a member of an exclusive club.