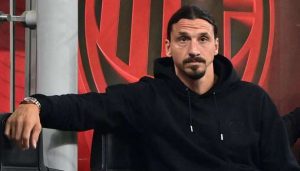 The Sweden International who is now into his fourth decade near the summit of the,

professional game, feels that he is no less a skilled star than the duo

Zlatan Ibrahimovic says that he does not consider himself a lesser player than,

Lionel Messi and Cristiano Ronaldo, with the forward stating that he believes himself to be “the best in the world“.

The AC Milan attacker is widely considered one of the most prolific players of his generation,

following a journeyman career across seven countries and 22 years.

The Sweden star has struggled to complete the clean sweep of honours enjoyed by,

regular Ballon d’Or victors Messi and Ronaldo however – but while playing down suggestions,

he is among the game’s all-time greats, the 39-year-old says he is not in either player’s shadow.

Ibrahimovic told France Football when asked about Ronaldo and Messi.

“If you’re talking about intrinsic qualities, I have nothing less than them,”

“If you look at the trophies, [then] yes I didn’t win the Champions League.

“But I don’t know how you calculate it. I’m not obsessed with it.

Because when you do good things collectively, the individual follows.

The individual cannot be good if the collective is not good.

I think I’m the best in the world. I don’t think it’s relevant to compare players with each other.

“Everyone has played in their generation, with different teammates … [it’s] difficult to compare.

I think everyone has their story and should face it.”

Ibrahimovic missed Euro 2020 with an injury he suffered late in the 2020-21 season with Milan,

after he had come out of retirement for the national side.