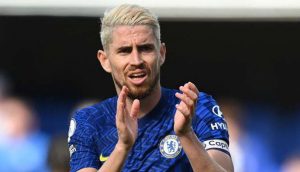 Jorginho’s agent  has opened the door to a transfer away from Chelsea, claiming “it would be a dream for him to return to Italy”

Chelsea paid an initial fee of £50 million ($69m) to sign Jorginho from Napoli in the summer of 2018, tying him down to a five-year contract.

That agreement is due to expire in less than two years, and Santos has now suggested,

that he could walk away from Stamford Bridge before then.

“Obviously, it would be a dream for him to return to Italy, hopefully after winning the World Cup.

“We’ll have to see what the market looks like in a couple of years and what the other situations are.”

Inter and Roma have been credited with an interest in Jorginho in the recent past,

but Juventus has been touted as his most likely next destination should he ever leave Chelsea.

Santos has also revealed that the Bianconeri made a move for the Italy international,

when Maurizio Sarri was in charge at Allianz Stadium in 2019-20.

The pair previously worked together at Napoli and for one season at Chelsea,

but Juve were unable to arrange a reunion.

“In the past, when Sarri was the coach, there was a possibility that Jorginho would come to Juventus,”

said Santos. “The Juventus director made an approach, it was a possibility.”