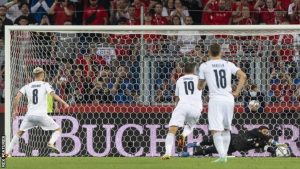 The European champions were the better side but also wasteful, with Jorginho seeing a second-half penalty saved.

Roberto Mancini’s side top the group with 10 points, four points ahead of the second-

Elsewhere, Germany and Spain both recorded big wins to top their groups.

And that is where Italy find themselves after securing a second successive draw,

but, one that gives them a place in the record books, ahead of the 35-game run of,

Chelsea midfielder Jorginho’s spot-kick was the Azzurri’s golden chance to seal the win,

and return to winning ways after their disappointing 1-1 home draw with Bulgaria on Thursday.

But his effort was saved by Yann Sommer, who guessed correctly to block down to his,

left after Domenico Berardi had been fouled by Ricardo Rodriguez.

The next Group C games are on Wednesday, with Italy hosting winless Lithuania and,

Switzerland travelling to face the side placed third in the group, Northern Ireland.