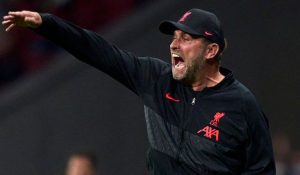 Liverpool manager described their thrilling 3-2 win at 10-man Atletico Madrid as “dirty”, but says those types of wins are the most important.

In a classic group-stage encounter, Liverpool were pegged back from 2-0 up,

by an Antoine Griezmann double, before the Frenchman was sent off and Mo Salah grabbed the winner from the spot.

There was drama late on though as German referee Daniel Siebert awarded 10-man,

Atletico a spot kick for a Diogo Jota foul on Jose Gimenez.

But, VAR intervened and after consulting the pitchside monitor, Siebert reversed his decision.

Atletico were unhappy with Siebert for the majority of the evening, in particular for Griezmann’s sending off, after unknowingly catching Roberto Firmino with a high foot.

Klopp was delighted to leave with three points, on a night he aptly described as “dirty”.

Jurgen klop said after the match:

The dirty ones are the really important ones! On a night like this, getting three points is really massive.”

“Our penalty is a penalty. And I think the other one is not a penalty.

But I don’t see it very often when they take it back [to the pitchside monitor]. I didn’t expect that, but I think it’s the right decision.

“The red card is for sure unlucky, but it’s still a red card.

Boot in the face and stuff like this, we’ve had red cards like this in the past.” 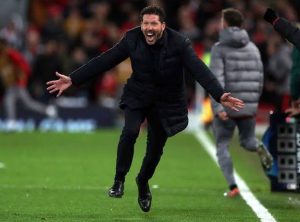 The drama didn’t end on full time as Atletico boss Diego Simeone rushed down the tunnel.

Without shaking Klopp’s hands, and though the Liverpool boss said his actions “weren’t right”, he could empathise with the Argentine.

Klopp also said he wasn’t happy with his own reaction after wagging his finger towards the direction of Simeone as he ran down the tunnel.

“The situation is clear, I wanted to shake his hand, he didn’t want it.”

“His reaction was for sure not right, mine [waving down the tunnel] was not too cool also.

But we are both emotional, so when I see him next time we will shake hands definitely

“He was obviously angry, not with me, but with the game, it’s nothing else.”

“I wanted to shake his hand, he was running off, so I could have just turned around, so I was as emotional as he was.

“I don’t think he did anything, and I’m not overly happy with my reaction to be honest, but that’s not too bad also.

He’s emotional, that should not be a surprise for anybody, I am as well.”