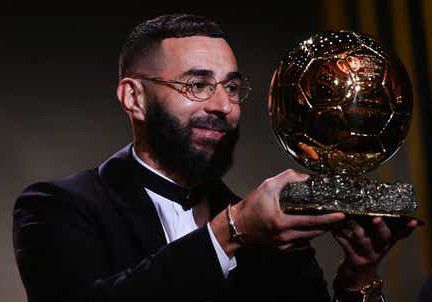 Karim Benzema dream comes true as he won the Ballon d’Or for the first time in his career.

The Real Madrid hit man becomes only the second player aside from Lionel Messi and Cristiano Ronaldo to win the award since 2008.

Robert Lewandowski, who was widely tipped to be one of the frontrunners for the prize, took fourth in the vote.

“This prize in front of me makes me really proud.

All the work I did, I never gave up, it was a childhood dream.”

“I had the motivation and had two role models in my life. [Zinedine] Zidane and Ronaldo as well.

“I always have this dream in my mind. Anything is possible.

There was a period where I wasn’t in the French team, but I never stopped working hard, I never gave up.

“I’m really proud of my journey. It wasn’t easy, it was difficult, and hard for my family as well.

To be here today, a first time for me, I’m pleased with my work and I’ll keep going.

“I want to thank my team-mates at Real Madrid and the national team.

My coach [Carlo Ancelotti], the president [Florentino Perez], and the Lyon president [Jean-Michel Aulas] too.

There’s a lot of people to thank.

“This Ballon d’Or is an individual prize but it’s also a collective one.”

This year’s Ballon d’Or was awarded for performance in the 2021-22 season, rather than the calendar year.

The Real Madrid striker scored 44 goals in 46 appearances in all competitions in a season where Carlo Ancelotti’s side won La Liga and the UEFA Champions League.

Benzema becomes the first Frenchman to win the award since Zidane in 1998 and the eighth different Real Madrid player to do so, two more than any other club.