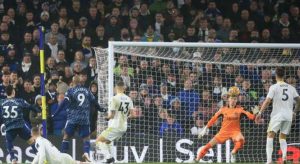 Martinelli’s double and BukayoSaka’s deflected effort made it 3-0 before half-time as the Gunners ruthlessly capitalised on an error-strewn Leeds performance.

Raphinha pulled one back from the penalty spot in the second half, before Arsenal substitute Emile Smith Rowe wrapped up an emphatic victory for Mikel Arteta’s side late on.

The scoreline could have been greater but for an impressive performance by Leeds goalkeeper Illan Meslier, who made fine stops to deny Saka, Alexandre Lacazette, Thomas Partey and Kieran Tierney.