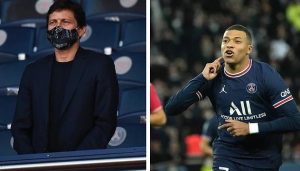 Kylian Mbappe is a man in demand, and Real Madrid’s pursuit of him along with Paris Saint-Germain’s determination to keep him will be the story of the upcoming transfer window

PSG sporting director Leonardo is well aware that other clubs will try and pry the young Frenchman away from Paris.

But he still believes there’s a chance he’ll stay, despite being heavily linked with a move away.

“It’s a complicated situation because we’d like him to stay here forever and we have to respect his position.”

Leonardo believes that Mbappe is currently the best player in the world.

“People think we say he’s the best because we want him to sign a new deal, but that’s not the case.”

“It’s bigger than what the club wants.

“At the age of nearly 23, Kylian has got an incredible maturity about him.”

PSG boss Mauricio Pochettino has come in for criticism this season over how his side have performed, but Leonardo still backs the Argentinian coach.

“Everything we thought about him when he arrived is still the same.”

“Time is needed to adapt to the changes made in the summer.

“You need to do that even with the players we have.”