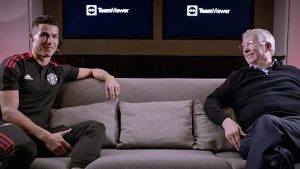 Cristiano Ronaldo and Sir Alex Ferguson shared a special bond at Manchester United, and they enjoyed a lot of success together.

Ronaldo, who re-joined Manchester United last summer, has looked back at his time working under the Scotsman and holds some great memories of Ferguson from that time, with one in particular standing out.

“We had so many beautiful moments together and won many trophies, but what I keep in my heart was the day my father was in hospital.”

“I was emotional, so very low, and I went to speak to the boss and he said, ‘Go there to be with him’.

“We had difficult games coming up and I was a key player, but he understood my situation and he wanted me to be with my family.

“That was most important thing about him, more than winning the Premier League or Champions League.”

Ferguson himself also spoke of their meeting when he let Ronaldo go to Portugal to be with his father.

“I knew he was ill and it was important for Cristiano to be there.”

“It didn’t matter about the football club, there are some things bigger and family is one of them.

“I learned that as a young manager at 33. A young boy came into my office and asked for the Friday off. I said, ‘Why?’ and he said his mother had died.

“From that moment, if a player says he wants tomorrow off, my response is, ‘Yeah, can I help you?'”

Ferguson played a huge role in the development of a young Ronaldo.

Helping him become one of the greatest players of all time, and was also hugely influential in his return to the club from Juventus last summer after 12 years away.