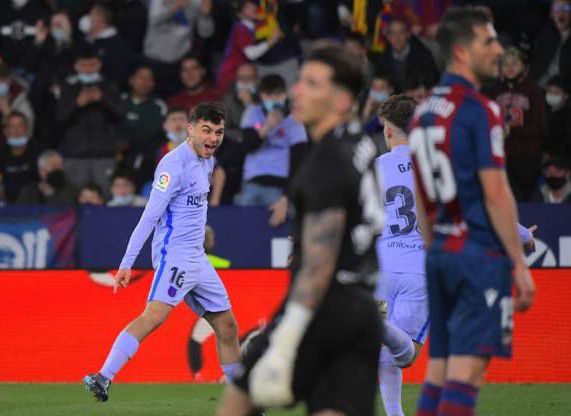 Barcelona’s extended their winning streak to seven games in La Liga after Luuk De Jong came off the bench to net a stunning late winner as Xavi Hernandez’s side edged Levante in a 3-2 classic.

Xavi’s side conceded three penalties, two of which were converted, as the hosts did their best to keep their slim hopes of survival alive,

while Barcelona strengthened their place in the top-four and kept an unlikely title hunt alive.

They then took full advantage of the hosts’ vulnerability as goals from Pierre-Emerick Aubameyang and Pedri turned the game on its head.

However, there were to be more twists as substitute Clement Lenglet upended Dani Gomez and the hosts’ third different penalty taker Gonzalo Melero made no mistake.

But in the dying moments De Jong powered home a brilliant cross from Jordi Alba to give Barca the win.

The result lifts Barcelona back into second, above Sevilla on goal difference but four points ahead of fifth-placed Betis, while Levante remain seven points adrift of safety with just seven games left to play.