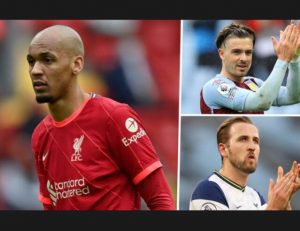 Fabinho insists Liverpool are not fear about the spending of their rivals this summer, as Jurgen Klopp’s side prepare to go all out to regain their Premier League crown.

The Reds, like the rest of the football world, watched on this week as Manchester City broke the British transfer record, signing Jack Grealish from Aston Villa in a £100million ($139m) deal.

The reigning champions may not be finished there either, with manager Pep Guardiola confirming City are keen on signing England captain Harry Kane from Tottenham before the window shuts at the end of August.

Big deals are expected elsewhere in the Premier League, with Champions League winners Chelsea closing in on the signing of Romelu Lukaku from Inter.

Manchester United, meanwhile, have added Jadon Sancho and Raphael Varane to the side which finished runners-up to City last season.

It promises to be a competitive season at the top end of the table, but Fabinho told reporters that the business of City, Chelsea and United will have no impact on Liverpool’s own preparations.

“This Liverpool squad has already won the Premier League, the Champions League… important trophies,” the Brazilian said. “We have already shown what we are capable of.

“We don’t pay attention to the other teams. City are the Premier League champions and Chelsea the Champions League champions. The English teams are always strong and will always fight for trophies. This year won’t be different.

“We don’t pay too much attention to the other teams, we just focus on us and working hard to be in the best way possible.”

Liverpool’s summer has been a little quieter than their main title rivals, though they did make a big signing of their own, bringing defender Ibrahima Konate from RB Leipzig in a £36m ($50m) deal in May.

Since then, the focus at Anfield has been on contract renewals and sales, with a number of key players – Fabinho included – committing to new long term deals, and a host of fringe players offloaded.

One key departure, though, was Gini Wijnaldum, who joined Paris Saint-Germain on a free transfer having failed to agree a new deal with Liverpool.

The Dutchman made 51 appearances for the Reds in all competitions last season, and while Fabinho admits he will be missed this season, he believes there is enough midfield quality within Klopp’s squad to cope.

“Gini was a really special player for this club. For me personally, he helped me a lot since I arrived at the club. Now he is at another team and I wish him all the best at PSG.

“But our squad has already shown we have good players to replace him. I think the midfield is the part of the team where we have more players – we have Hendo [Jordan Henderson], me, Thiago [Alcantara], Curtis [Jones], Millie [James Milner], Naby Keita, a lot of players who can play in this position.

“I’m not worried about it (Wijnaldum leaving). Of course, we will miss Gini for the person he is as well, but we have the quality in this group to replace him.”