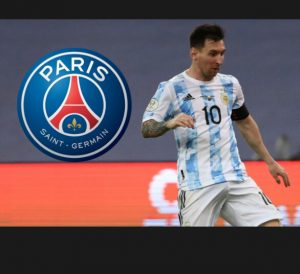 The Argentine manager has reacted to the prospect of the six-time Ballon d’Or winner moving to Parc des Princes following his stunning Barcelona exit.

Messi’s 21-year stay at Barca officially ended last Friday after the club announced that they were unable to re-register the 34-year-old for the 2021-22 season.

The Blaugrana have said that “financial and structural obstacles” prevented them from tying Messi down to a new five-year deal, and PSG have already reportedly moved to try and capitalise on the situation and bring the six-time Ballon d’Or winner onto their books.

Parc des Princes is being touted as the most likely next destination for Messi as he looks to embark on the next stage of his career, and Pochettino has done little to play down the ongoing rumours.

Speaking after watching PSG open their latest domestic campaign with a 2-1 win at Troyes, the Argentine manager told reporters of his admiration towards his compatriot: “Messi is one of the best players in history and every coach dreams of coaching the best.”

Pochettino added on whether the speculation surrounding Messi’s future affected his team at Stade de l’Aube: “The players are professionals. Today, with social networks, everyone has access to information and saw that Lionel Messi would not continue at Barcelona.

“His name has been associated with different clubs. But I believe that the team is professional and has ignored that for this game.

“And that they will stay focused until the end of the transfer window.”

Will Messi end up at PSG?

PSG are reportedly already in talks with Messi’s representatives over a free transfer, but it is not yet known whether the French outfit will be able to finalise a deal that stays within the Financial Fair Play (FFP) limits.

The likes of Manchester City and Inter were also linked with the Argentina international earlier this year, with a potential foray into MLS or a return to boyhood club Newell’s Old Boys also suggested for Barca’s all-time record goalscorer.

However, PSG are being tipped to win the race for Messi at this stage, with his fellow countrymen Angel Di Maria, Mauro Icardi and Leandro Paredes already on the books at Parc des Princes and former Blaugrana team-mate Neymar thought to be trying to persuade him to choose Paris.