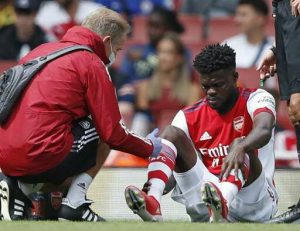 The Gunners will be without a Ghana international for the start of the new Premier League season, but he will not be missing for long

Arsenal are expecting Thomas Partey to return to training inside three weeks, with the Ghana international midfielder currently nursing an ankle injury.

The 28-year-old was laid low during a pre-season outing against Chelsea and will miss the start of the 2021-22 campaign.

He will, however, not be sidelined for too long, in a welcome boost for Mikel Arteta, and should come back into contention after the first international break.

Arsenal have said of Partey in a fitness update on the club’s official website: “Thomas sustained an injury to ligaments in his right ankle during the friendly match against Chelsea last Sunday.

“Thomas continues to be assessed and is expected to be back in training in approximately three weeks.

How many games will Partey miss?

Arsenal have a friendly derby date with local rivals Tottenham to take in on Sunday.

They will then be involved in a Premier League curtain-raiser against Brentford next Friday.

A testing start to the season then takes in a home date with Chelsea on August 22 and a trip to Manchester City six days later.

Domestic action then shuts down, giving Partey chance to work on his fitness before the Gunners face Norwich on September 11.

Who else is missing for Arsenal?

Arteta is in the process of finalising his plans for a new season, but does not have a full squad at his disposal.

Eddie Nketiah and Gabriel Magalhaes sit alongside Partey in the treatment room, with an England U21 international striker and Brazilian centre-half also weeks away from returning to action.

Arsenal in a statement said of Nketiah: “Eddie sustained bruising to his right ankle during the friendly match against Chelsea last Sunday.

“Eddie continues to be assessed and is expected to be back in training in approximately four weeks.”

They added on a South American defender: “Gabriel sustained an injury to his right knee whilst with the Brazilian Olympic Squad.

“Gabriel is currently being assessed and is aiming to be back in training in the forthcoming weeks.”