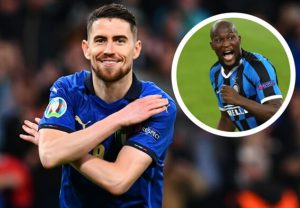 Jorginho has delivered his verdict on Romelu Lukaku’s proposed move to Chelsea, with the Blues closing in on a deal that will bring a Belgium international striker back onto their books for £98 million ($136m).

Goal has been able to confirm that a deal for the Inter frontman has been agreed in principle, with those at Stamford Bridge now working hard on pushing a big-money transfer through ahead of the 2021-22 Premier League season.

Few additions are required in west London, given that Thomas Tuchel has Champions League-winning talent at his disposal, but Jorginho admits that any world-class performers will be embraced with open arms as a proven goalscorer edges his way back to England.

Quizzed on the transfer talk by TNT Sports , Chelsea midfielder Jorginho has said: “A player like Lukaku, who has been enjoying great seasons and was a champion in Italy, for sure is a player who would contribute a lot.

“Anyone who comes to contribute would be worth it. Let’s see what happens next.”

Why do Chelsea want Lukaku?

The Blues are splashing out considerably more for Lukaku than they paid to Anderlecht when first acquiring his services back in 2011.

They only spent £10 million back then, but handed an inexperienced forward just 15 goalless appearances before sanctioning loan moves and a permanent transfer elsewhere.

Lukaku has starred outside of west London for West Brom, Everton, Manchester United and Inter, with a Serie A title triumph enjoyed last season.

He forms part of the Premier League’s 100-goal club and has found the target on 64 occasions through just 95 appearances for Inter.

The intention is to build on that success, with the likes of Lukaku being targeted to aid that cause.

Jorginho is among those to have got a taste for winning, having also helped Italy to Euro 2020 glory over the summer, and a man said to be in Ballon d’Or contention is eager to add to his medal collection in 2021-22.

He has added on his ambition: “My focus is to win more titles. It’s something gratifying and addictive.

“The Golden Ball, I don’t even comment. There’s nothing to comment on. It’s just about working hard on the field, lifting trophies and taking medals home. My focus is on that.”