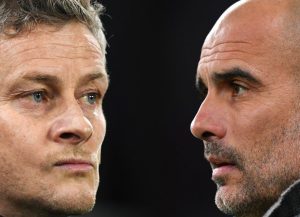 Ole Gunnar Solskjaer is set for one of his biggest tests of his Old Trafford reign in the first Manchester derby of the season.

The Norwegian found his job hanging by a thread the last time Manchester United played host to one of their biggest rivals as they fell to a 5-0 defeat to Liverpool last month.

The Red Devils bounced back with a 3-0 win over Tottenham last weekend.

But the clash with Man City will be a true test of whether they have turned a corner.

United do have a good recent Premier League record against their noisy neighbours.

However, having not lost in the top-flight since April 2019.

City also go into the derby having suffered a shock loss at home to Crystal Palace at the weekend.

The Premier League clash will take place this weekend on Saturday, November 6.

Old Trafford will host the first Manchester derby of the campaign and kick-off is at 12:30pm.

United defender Raphael Varane is expected to be sidelined for up to a month with a hamstring injury.

The home side are also sweating on the fitness of Victor Lindelof with the centre-back suffering an injury in training on Monday.

Paul Pogba also won’t be available, with the midfielder set to serve the second of his three game ban for his red card against Liverpool.

City, meanwhile, will also be without a suspended player after Aymeric Laporte was sent off in the 2-0 defeat to Crystal Palace on Saturday.

Ferran Torres is still nursing a foot injury picked up on international duty with Spain but teenage striker Liam Delap is available once more.

“We have to keep this attitude. I think just because we beat Spurs 3-0.

And we picked up a point [against Atalanta], we can’t put our heads down, we can’t get comfortable.

“We can’t think, ‘Ah, look, we’ve done it now, we’ve got out of our rut and everything’s perfect, everything’s fine’. It’s not.

“We know we need to dig deep. We know we’re not in a good situation, we know what we’ve been doing hasn’t been good enough.

“As a team we’ve talked about that inside the dressing room.

So the games didn’t come any easier, so we need to be ready for this one because it’s at home and it’s a big game.”

“The people were taking the p*** out of me saying [the Club Brugge game] was more important than United – and it was.

“But now the most important game ever is Man United.

“When you are Manchester City you realise nobody helps you – no one.”