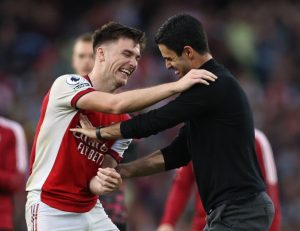 Arsenal will look to stretch their recent unbeaten run to 10 games in all competitions when they host Watford this weekend.

Mikel Arteta’s in-form Gunners haven’t tasted defeat since a 5-0 loss to Manchester City at the end of August that had them in the relegation zone.

A run of five wins in seven in the Premier League since then has rocketed Arsenal up to sixth in the table – just three points behind West Ham in fourth.

Claudio Ranieri, meanwhile, has suffered an inconsistent start to life at Watford; the Hornets have lost two and won once since the Italian took over.

It will take place at the Emirates with a kick-off time of 2pm.

Watford have lost six of their seven away Premier League games against Arsenal – with their only win coming in a 2-1 victory in January 2017.

Mikel Arteta is hoping Kieran Tierney could return having been struggling with an ankle injury that saw him miss the club’s last three games.

“Kieran has been training the last two days, he is feeling much better so hopefully he will be available,” said Arteta.

“Let’s see in the next two training sessions how he’s feeling.

He has done bits with the team but he’s not fully trained yet, so in the next two days we will see how he is and where his fitness is.”

Other than that, Arsenal are only missing Granit Xhaka with the midfielder out until next year with an ankle issue.

Watford meanwhile will be without Ken Sema, Christian Kabasele, and Peter Etebo for the short trip across London.

Kiko Femenia and Francisco Sierralta could be available however after the Hornets pair missed the 1-0 home defeat to Southampton last weekend.