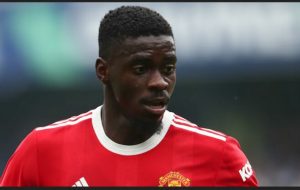 Axel Tuanzebe’s loan move from Manchester United to Napoli for the remainder of the season has been confirmed, cutting short his previous spell at Aston Villa.

The 24-year-old centre-back, whose chances at Villa suddenly became limited by a change in manager,

and subsequent change in formation, now joins a Napoli side still just about in the Serie A title race and on course to return to the Champions League.

Tuanzebe is under contract in Manchester until 2023 with the option of another year and the loan doesn’t appear to include an option to make it a permanent transfer.

Napoli are believed to have agreed to pay an initial £500,000 for the loan, with additional bonus payments potentially taking it up to £1m in total by the end of the season.

Read Also: Set Back As Paul Pogba Will Out For At Least Another Month, Confirmed Ralf Rangnick

Tuanzebe was once hailed as a star of the future at Old Trafford.

He joined the academy ranks at the age of eight, won the club’s prized Jimmy Murphy Player of the Year award in 2015 and was unusually captain of the Under-18 team while still a first year scholar.

and he has made 37 senior appearances for United to date.

But his young career has been unfortunately hampered by a number of injuries.

It was hoped that a return to Villa on loan this season would have given Tuanzebe his first real opportunity to play regular Premier League football.

But it hasn’t worked out that way and his expected switch to Italian football is a fresh chance to prove himself.

Serie A has proven to be a good option for English centre-backs in recent times, with Chris Smalling and FIkayo Tomori relaunching stalling careers with Roma and AC Milan respectively.