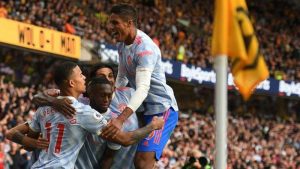 Manchester United defeat Wolves to post a new best mark for games on the road in the top-flight, surpassing the record of Arsenal’s ‘Invincibles’

The red devil’s made history as  they beat Wolves 1-0 on Sunday evening, setting a new English football record for consecutive away matches unbeaten.

The Red Devils remain unbeaten in the Premier League this season,

• Nani Explains How He Was Inspired By Ronaldo As A Kid

Ole Gunnar Solskjaer’s men have not lost any of their last 28 away games in the Premier League.

28 – Manchester United are now unbeaten in their last 28 Premier League away games (W18 D10), establishing a new record for the longest unbeaten away run in English Football League history. Unstoppable.

That is the longest unbeaten away run in English Football League history.

During that time, United have won 18 and drawn 10 matches.

That run has seen United break Arsenal’s record, which was set by the “Invincibles” side between April 2003 and September 2004.

Sunday’s clash was Solskjaer’s 100th match in charge of United in the Premier League.

United have won 53 matches in the league so far under the Norwegian,

and there is only one Red Devils coach who has won more in his first 100 top-flight,

Due to the upcoming international fixtures, United are not in action again until September 11.

They will take on Newcastle at home before turning their attention to the first match of the Champions League group stage against Young Boys on September 14.