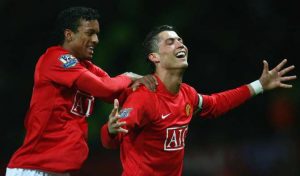 Luis Nani was 12 years old when he first became aware of Cristiano Ronaldo, and his incredible will to win.

Nani was in Lisbon for a trial with Sporting CP, where a teenage Ronaldo was already making a name for himself.

Nani quickly realised why. During a youth-team game at one of Sporting’s training complex,

Ronaldo was left in tears on the sidelines after the referee had decided against awarding him a free kick,

thus allowing the opposition to race down the other end of the pitch and score.

Ronaldo’s coach went over to him as he sat feeling sorry for himself and said:

“Come on, you can’t do that! You need to keep pushing. Sometimes things will happen.”

Ronaldo re-entered the field of play, immediately got on the end of a cross,

and took two touches before backheeling the ball in the back of the net.

“Seeing Cristiano that day, and how behaved, made me realise why he was so good,”

“Even at that time, you could see he was something else compared to the other players.

“Everyone was saying he’d be the best, so I started to look at him and thought to myself, ‘I need to improve myself.’

“At that age I knew I was good but I was not at that level,

so, I started focusing on the best players like him.

I started pushing myself more and, in a month,I was able to see that I had improved so fast.”

Nani realised his dream of playing for Sporting CP when he made his senior debut,

His determination to try to emulate Ronaldo’s winning mentality had earned him,

the chance to join his compatriot at Old Trafford. “It was beautiful,” Nani enthuses.

Nani moved in with Ronaldo and another Portuguese-speaker, Brazilian midfielder Anderson.

“It was great for us,” he reveals.

“We were three young players who like to compete every single day and we had everything available to us at home,

to enjoy: swimming, ping pong, tennis, and that was making us better every single day. It was perfect!

While they had a great relationship off the pitch,

Ronaldo’s imperious form kept Nani on the periphery for his couple of seasons.

In his maiden campaign, he made 16 league starts but in his second, just seven.

Still, Nani never held any hard feelings towards his good friend. Quite the opposite, in fact.

Read Also: • Arsenal Worst Start In The History. How Arteta Got It Wrong?

• Juventus Taste A Defeat At Home To Empoli Without Ronaldo

“It was great,” he explains.

“When you have a player like him in your team, you’re not afraid of anything or any team.

I think that’s the greatest feeling you can have when you play with him.

“You’re always ready, always confident you can win and he gave that to us every single season.”

At the end of Nani’s first year in Manchester, United won the double, an achievement,

he will never forget – not least because he wasn’t fully prepared for United’s Premier League title celebrations on the final day of the season.

“I wasn’t in the team against Wigan,” the 34-year-old recalls,

“so I was sat in the stands. When Ryan Giggs’ goal went in,

they sent me to the dressing room to get changed for the celebrations.

“But I didn’t have any boots. So, I was scrambling around looking for some boots,

and I had to put Owen Hargreaves’ on! They were a bit big for me but I wasn’t bothered. I just wanted to celebrate with the team.”

That was just the beginning for Nani, though – the first of four league titles he would win under Sir Alex Ferguson.

When Ronaldo left for Real Madrid in 2009, he emerged out of his shadow and became,

a regular in the team down the right wing, scoring some spectacular goals in the process. But what was his favourite?

“It was a difficult game, against a strong team in front of our fans.

It was a great strike against a good goalkeeper (Petr Czech) and it’s not easy to score a goal like that against him.”

That goal was, of course, quickly followed by his trademark backflip celebration.

There were subsequent suggestions that Ferguson didn’t approve of his acrobatics but Nani insists it was never discussed with the Scot.

“There were some rumours in the club that he thought that it was a problem but I never stopped,” he said.

“The manager never came to me and said anything about it.

“One game, I scored a goal and I didn’t do it, but that was because I had a pain in my foot,

and I couldn’t do the back flip! As soon as I got better, I did it again.”

Nowadays, the celebrations are more muted, with Nani joking that he is not 18 anymore.

Still, Nani retains his capacity for a spectacular strike.

Just like Ronaldo, he is still going strong in his mid-thirties. Indeed, he is presently tearing up MLS as captain of Orlando City.

“I think it’s been a great year for me and my team,” he said.

“The team is much more stronger and we’ve been performing very well against strong teams in the MLS and getting good results.

For me, especially, this season has been my best season here. I feel very confident.”

Nani is also revelling in his role of leader He names Rio Ferdinand, Nemanja Vidic, Ryan Giggs and Patrice Evra,

as former team-mates he learned a lot from from during his time at Old Trafford and that has moulded him into the captain he is today.

Nani hasn’t given up hope that one day he’ll be reunited with his friend.

It won’t be this summer as Ronaldo is heading back to Old Trafford, but Nani isn’t ruling anything out.

“The future is in god’s hands but maybe it’s possible, you never know,” Nani said about Ronaldo joining him in MLS.

But how long can they both keep going? Nani is 35 in a couple of months and Ronaldo turns 37 in February.

“I just keep going and keep working and try to maintain my health and do my best every single season,” Nani adds.

“The focus keeps me going and the experience of how to treat yourself, you need to keep motivated to work every single day and maintain health.