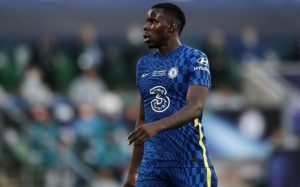 West Ham have signed France centre-back Kurt Zouma from Chelsea on a four-year deal for £29.8m.

Zouma, 26, won two Premier League titles, a Champions League and a League Cup during his seven-year spell at Stamford Bridge.

He has eight caps for France and had loan spells at Saint-Etienne, Stoke City and Everton during his time at Chelsea.

“My conversation with the manager went very fast.

I just felt like he really wanted me to come and join the team, especially a good team that’s started the season very, very well.

“With the great season that West Ham had last year, that gave the team a lot of confidence to improve this year – and I want to help the team do that.”

Zouma joined Chelsea as a 19-year-old from Saint-Etienne in January 2014,

and made 151 appearances for the Blues in all competitions, scoring 10 goals.

but did not figure prominently in the long-term plans of boss Thomas Tuchel, who has been targeting Sevilla’s 22-year-old France defender Jules Kounde.

West Ham are top of the Premier League table with seven points from three games after Saturday’s 2-2 draw with Crystal Palace.

“He is a player we have tracked for some time, and we have taken great care and diligence to make the transfer happen.

He was always our first choice and I am very happy that he is now our player.”

Zouma, who is due to link up with France this week for their World Cup qualifiers,

against Bosnia-Herzegovina, Ukraine and Finland, could make his West Ham debut,

at Southampton on 11 September when the Premier League returns after the international break.