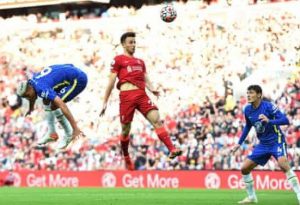 Liverpool takes on Chelsea at Anfield and the match resulted to too much drama with VAR especially at first half of the game. Reece James finally sees red card before ending of first half while Chelsea was leading  with a goal.

Superb vision from Alexander-Arnold looking for Salah to complete the one-two. Corner.

Liverpool looking to deliver knockout punch – but they need patience
If Liverpool manage this half right, they’ll win. Chelsea are already wobbling. Jurgen Klopp’s side just need to retain possession and not panic. Show a bit of patience and chances will come.

Calm pressure from Klopp’s side
A bit of calm pressure from Liverpool now would do them well. There’s a long way to go and they’re going to get a lot of chances this half. Chelsea will threaten on the break but not as often.

ALSO SEE: Man City Unveil Statues Of Their Legends
Boos from the Kop as Marcos Alonso messes up any effort to stop Harvey Elliott down the right but manages to win a free-kick after basically sitting on the ball.

Virgil van Dijk strolls into ‘Daniel Agger’ territory before pulling the trigger, forcing Mendy into a save. Liverpool have started the half brightly.