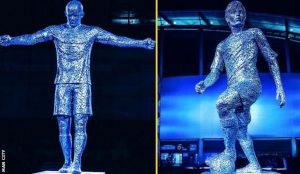 Manchester City have unveiled statues of Vincent Kompany and David Silva on the east side of Etihad Stadium.

The statues are a recognition of the contribution of the club’s former players to City’s elevation from a mid-ranking Premier League team to one of the most successful in the modern game.

Andy Scott made the statues and will also create one for striker Sergio Aguero, who left City in the summer.

“Being at City changed my life,” said Silva.

“I’m proud of what we did together and I feel emotional that it has been recognised like this.”

Kompany was with City for 11 years, eight of them as club captain, and won four Premier League titles, two FA Cups and four League Cups with them.

“I didn’t really expect to be recognised by such a great club in that way,” said Kompany, who is now manager of Anderlecht.

“And then especially the pose, for me it means a lot.”

The statues have been made from thousands of welded pieces of galvanised steel and at night will be illuminated with blue tinted lighting.