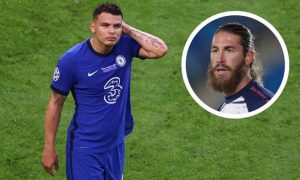 The Brazilian was released by the Ligue 1 side last year and has acknowledged that he has been left hurt by the call to bring in the Spain star.

Thiago Silva has admitted that Paris Saint-Germain’s decision to sign Sergio Ramos has left him “truly sad,” after he was not offered a similar deal despite the duo being close in age.

Former Real Madrid captain Ramos is one of a number of high-profile signings at Parc des Princes this summer, as the Ligue 1 side look to cement their hopes of a successful European challenge.

Yet Silva, who is entering his second year at Chelsea following his PSG exit last term, has admitted that while has no issue with Ramos, the club’s call to sign the Spain star rankles given his own long service – and sharp release – from the French side.

• Man Utd Going To Have A Great Season With Inclusion Of Ronaldo. Says Neville

“I have nothing against Sergio Ramos, but Sergio, at the time at which they offered him a two-year contract, was the same age as me last year,” the 36-year-old told ESPN Brazil.

“So that made me truly sad. I have not yet spoken about it with anyone, because it made me really sad because I felt like I had done nothing for the club.

“My departure is a page that has certainly been turned, but at the same time I think a lot, I reflect a lot on everything that has happened. I think that something else could have been done.

“Because it was not eight days, or eight months that I spent with PSG. It was eight years with lots of victories, lots of work to be able to change, and put PSG at the level that it is at today.

“I want PSG to win, because the club deserves all the respect. But, in light of the way that things played out, I have this feeling of sadness and I feel that it could have been done differently.”

While the details of Silva’s PSG exit – mere weeks after a Champions League final defeat to Bayern Munich – may have left a sour taste in the Brazilian’s mouth, he has since flourished in his role with the Blues.

An astute centre-back brought in to manage games by both Frank Lampard and, later, Thomas Tuchel, the veteran Selecao star corrected his Champions League drought when he helped Chelsea beat Manchester City in the final earlier this year.

He was rewarded with a one-year extension through the end of the 2021-22 campaign, though how much he will feature given his injury woes remains to be seen.