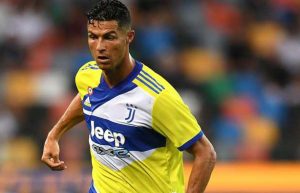 The 36-year-old has posted a heartfelt goodbye messages on social media after his move back to Old Trafford was confirmed.

Cristiano Ronaldo has posted a heartfelt farewell message to Juventus after his transfer back to Manchester United was confirmed on Friday.

The 36-year-old took to social media to thank Juventus fans for their support after he spent three seasons with the Bianconeri.

Read Also: Man Utd Going To Have A Great Season With Inclusion Of Ronaldo. Says Neville

“I gave my heart and soul for Juventus and I’ll always love the city of Turin until my final days.

“The ‘tifosi bianconeri’ always respected me and I tried to thank that respect by fighting for them in every game,every season, every competition.

In the end, we can all look back and realise that we achieved great things, not all that we wanted, but still, we wrote a pretty beautiful story together.

“I will always be one of you. You are now part of my history,

as I feel that I’m part of yours. Italy, Juve, Turin, tifosi bianconeri, you’ll always be in my heart.”

The Portuguese star managed to continue his sensational goalscoring record during his three seasons in Turin, netting 101 times over 134 appearances.

Ronaldo also took home his share of silverware, having won Serie A in his first two seasons and lifting the Coppa Italia last term.

But Ronaldo failed to help Juve achieve their ultimate goal of another Champions League title.

In his three seasons with the club, the farthest the Old Lady made it in Europe’s top club competition was the quarter-final stage.