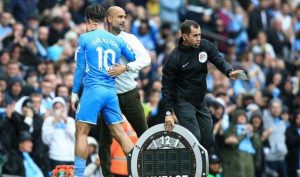 The Premier League champions had been linked with a move for England and Tottenham striker Harry Kane.

And they were also briefly linked with a deal for Portugal forward Cristiano Ronaldo, who is set to re-join rivals Manchester United.

But Guardiola says he is “more than satisfied” with his current squad.

City’s only major arrival was the £100m club-record signing of Aston Villa captain Jack Grealish, while record goalscorer Sergio Aguero left after 10 years at the club.

“I am incredibly happy with the squad I have, more than satisfied,” Guardiola said.

“We are the same squad except one player leaves, Sergio, and we have Jack.

“Anything can happen but, my opinion right now, today, is everything will finish like it is now and that’s good enough.”

Kane announced earlier in the week he would be staying with Spurs this summer.

It is a match that will see Guardiola taking on his former assistant manager Mikel Arteta,

who is under some pressure after his side lost their first two matches this season in the Premier League.

However they did win 6-0 at West Brom in the Carabao Cup in midweek.

“Two games – they have played two games, not 20 or 50 fixtures. Sometimes I think we managers are crazy to do the job.

“They trust Mikel because they spent money to reinforce the team. Why don’t you give more time to the teams to build what they want to build? You need time.”