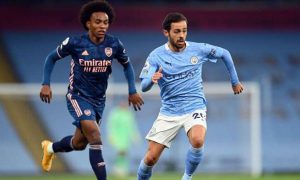 As the competition enters its third day of action, below are the  head-to-head records for teams pitted against each other

Man City’s Raheem Sterling has been involved in seven goals in his last six Premier League appearances against Arsenal (5 goals, 2 assists), netting in each of his last four against the Gunners including the only goal in both meetings last term.

Aston Villa have never lost a top-flight match against Brentford (W5 D1), with this the first such meeting between the sides since February 1947 (Brentford 0-2 Aston Villa).

Everton are winless in their last four away games against Brighton in all competitions (D2 L2) since a 2-1 win in April 1983.

Newcastle have won 14 Premier League home games against Southampton – against no side have they won more at St James’ Park in the competition.

Leicester have won five of their last six away league games against promoted sides, with the only exception in that run being a 1-0 loss at Norwich in February 2020.

• Pep Guardiola Expressed His Satisfaction On His Current Squad

After losing their first two Premier League away games against West Ham, Crystal Palace have lost just two of their subsequent eight visits to the Hammers in the competition (W3 D3).

After netting four goals in his first four Premier League appearances against Liverpool, Chelsea striker Romelu Lukaku has scored in just one of his last 11 against the Reds.

Chris Wood is Burnley’s all-time top scorer in the Premier League with 46 goals, however, he’s only scored once in his eight league appearances against former club Leeds United. That goal came while playing for Millwall in the Championship in November 2012, while he’s failed to score in each of his five league games against them since then.

Tottenham’s Son Heung-min has scored five goals in nine Premier League appearances against Watford – only against Southampton (9) has he scored more in the competition.

Manchester United are unbeaten in their last 27 Premier League away games (W17 D10) – if they avoid defeat here they will set a new record for the longest unbeaten away run in English Football League history.