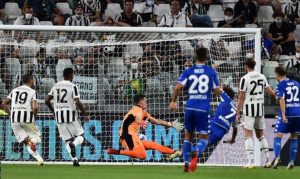 Juventus slipped to defeat at home to Empoli in their first game without Cristiano Ronaldo.

The result leaves the Turin side with no wins and one point from their opening two Serie A games.

Leonardo Mancuso’s first-half goal was enough to give Empoli only their second top-flight win over the 36-time champions, who were disappointing.

The defeat came a day after Manchester United said they had reached an agreement to re-sign Ronaldo.

Juve finished fourth in Serie A last season and began this campaign by letting a two-goal lead,

over Udinese slip, ending with a 2-2 draw after Ronaldo had asked to be left out of the starting XI.

On Saturday, Massimiliano Allegri’s side posed little threat in front of the Empoli goal,

Mancuso, 29, who spent 18 months at Juve without ever playing for the first team, had volleyed in from close range after 21 minutes.

Empoli hung on to claim their first win over Juve in the league since 1999.

No Ronaldo no show?