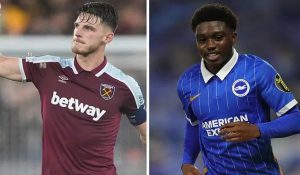 Manchester United didn’t expect to head into the January transfer window with a new coach in place, yet it does appear as though that need for change has actually reshuffled the club in a positive manner.

Ed Woodward is now nowhere to be seen, merely waiting to collect his retirement gift from the Glazer family, no longer ruling over footballing matters with an iron fist, despite having zero talent or qualification to do so.

John Murtough has stepped into the limelight, working closely with Ralf Rangnick since the German arrived.

And there now appears to be a cohesive approach to how Manchester United want to build their team.

The Red devil’s are looking to address their midfield problem first and foremost, but with other positions also in play, just who are the club’s targets in 2022?

Christopher Nkunku is a player who is enjoying the greatest moment of his career at RB Leipzig.

Having fashioned a role for himself just behind the strikers in Leipzig’s team.

The Frenchman has added goals to his game and is impossible to deal with when making surging runs from deep.

Whilst a little similar to Bruno Fernandes in that regard, Nkunku’s ability to press is an added benefit and again his familiarity with the Rangnick system would only serve to ease his adaptation.

However, he would perhaps only be an option if Pogba and Martial were to leave in January, given the fact he essentially covers what both offer to a certain extent.

Initially linked with a move to Old Trafford when Rangnick was appointed,

Haidara would represent an instant upgrade on United’s current options, at least in terms to fitting into the German coach’s style.

Having played a central role in Red Bull Salzburg’s pursuit of the Mali midfielder in 2016.

Rangnick knows the midfielder well and he could operate as a positive foil for Fred.

Particularly in matches where United need to press high up the pitch for longer, with the Champions League in mind.

There are, though, concerns about Haidara’s performances with RB Leipzig this term, as well as the fact he would immediately be off to the AFCON with Mali.

Declan Rice has been Manchester United’s primary midfield target for a year already.

Although it seems at this point that there will be no way for them to sign him without competition from Manchester City and Chelsea.

David Moyes spoke publicly about how the English midfielder’s value has risen even further after his exploits at Euro 2020 and in the Europa League with West Ham United.

He is the perfect holding midfielder and is excellent at cutting out danger and being all-action in both halves of the pitch, although it’s not clear if a naturally holding presence in midfield fits into Rangnick’s tactical blueprint.

One of the early conclusions of Rangnick’s first weeks in charge at Old Trafford has been that he doesn’t rate Aaron Wan-Bissaka as highly as Ole Gunnar Solskjaer did.

He has arrived and given immediate prominence to Diogo Dalot, who has impressed to a degree, but there may be a need for a more permanent solution at the position.

United persisted for years with Ashley Young and Antonio Valencia at full-back, despite the fact they were both hopeless in the role.

Yet, they probably went too far the other way in targeting Wan-Bissaka, who is primarily focused on defending, to the detriment of his attacking contributions.

Tariq Lamptey has impressed a lot whilst at Brighton, almost causing people to ask why on earth Chelsea let him go.

He is a balanced full-back who excels on either side of the ball and would also bring an added level of energy to a pressing team, as witnessed under Graham Potter at the Amex Stadium.