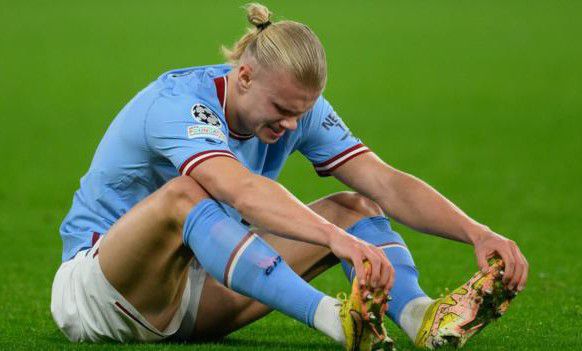 Erling is still a doubt for Manchester City clash with Leicester City.

City boss Guardiola is not yet able to confirm availability of Haaland’s for Leicester match.

Haaland has dealt City an injury scare after coming off against Borussia Dortmund in midweek, and was pictured limping following the game.

The 22-year-old, who has a remarkable 17 Premier League goals this season,

is “better” according to his manager but will need to come through training on Friday afternoon before a decision is made on the Premier League game.

Should Haaland not feature, or start on the bench, Guardiola confirmed that fellow summer signing Julian Alvarez will start.

“If Haaland doesn’t play then Alvarez is the natural first option to replace him.”

Elsewhere, Joao Cancelo is hoping of shaking off an illness to play, while Phil Foden will be pushing to start after coming on as a substitute against Brighton.