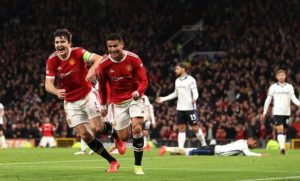 Man Utd come from behind to sealed a deserve 3point as Cristiano Ronaldo scored a late winner at Old Trafford in the Champions League.

Mario Pasalic turned in a cross to the stun the hosts after 15 minutes before Merih Demiral headed in a second.

Marcus Rashford pulled one back early in the second half with a neat finish.

Harry Maguire then drove in an equaliser in the closing stages before Ronaldo headed in the dramatic winner.

It was a stunning finale to an exhilarating game as boos at half-time turned into,

delirious cheers at full-time after one of the most sensational Champions League games at Old Trafford.