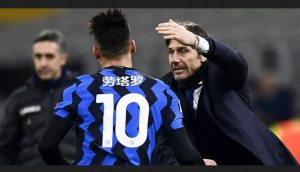 Antonio Conte is the favourite to step in after Ole Gunnar Solskjaer in the Manchester United hotseat.

Antonio Conte is near to takeover Ole as the Red Devils fell to a woeful loss at the King Power Stadium.

In a game they ‘deserved to lose’, according to Paul Pogba.

United have now won just two of their last seven games to bundle the pressure on Ole Gunnar Solskjaer.

And with Liverpool, Tottenham and Manchester City to come in their next three Premier League outings, the heat may be about to further rise on the under-fire United boss.

And it’s little surprise to see the big names queuing up with Zinedine Zidane and Conte strongly linked.

As per The Sun, it is Conte who tops the Glazers shortlist should the axe fall on Solskjaer.

Antonio Conte remains out of work having left Inter Milan over the summer in the wake of their financial issues.

And while he held talks with Tottenham over the summer, he did not feel that vacancy was right for him.

Nonetheless, the Italian certainly appears open to returning to the Premier League when questioned on his future recently.

Now, according to The Sun, Conte is ‘holding out’ for the United vacancy to come up.

Furthermore, he has reportedly vowed to ignore all other opportunities in a bid to become the next manager at Old Trafford.

Furthermore, they claim Conte plans to bring with him two former Inter Milan players should he take the job.

They state the Italian wants two of his trusted generals at Inter to sign for United in January, with Lautaro Martinez and Milan Skriniar the players in question.

They believe Conte would play Skriniar alongside Raphael Varane and Harry Maguire in a 3-5-2 formation.

Argentina star Martinez would start in attack alongside Cristiano Ronaldo or Mason Greenwood, with Bruno Fernandes in behind.

“I look for the projects instead and I am ready to stay at home if something is not convincing me.”

“It has to do with vision, honesty and principles. Generally, I like challenges and I’ve accepted many of them during my career.

“Even the top clubs I coached were never the favourites when I arrived.

“However, if there’s something that doesn’t convince me I prefer not to accept, regardless of the money.”

And I think that I am not someone who is happy with just a comfortable situation. I always chose the most difficult situation instead.

“As a player, I won everything it was possible to win, but I also lost a great deal.

“When you lose, it leaves within you the desire not to experience that again.

So you do everything to transmit that to your players when you are a head coach.

It all comes from your scars and wanting to avoid getting more.”