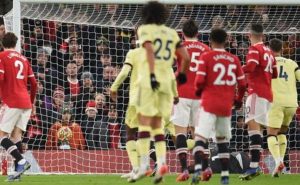 Cristiano Ronaldo made it 801 career goals as Manchester United beat Arsenal in a brilliant see-saw game that had controversy and crucial VAR decisions.

Emile Smith Rowe fired in the opener with goalkeeper David de Gea down injured after Fred trod on his heel, with VAR awarding the goal.

Martin Odegaard restored parity but Ronaldo struck a penalty winner after a VAR check for a foul on Fred.

In scoring his two goals, 36-year-old Ronaldo became the first player in history to reach 800 goals in competitive games for club and country, doing so in 1,097 matches.

The drama was watched by Ralf Rangnick, who replaces Michael Carrick as interim United boss after this game.