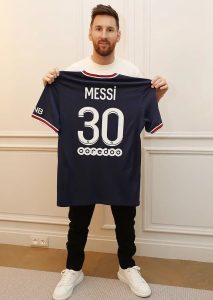 In an exclusive interview with Marca, the Argentine opened up about everything.

A calm and happy Messi opened his doors for MARCA, and he’s delighted with how smoothly he has settled in Paris.

Focusing on the football side of things, Messi knows that there’s a lot of pressure on Paris Saint-Germain in the Champions League this season.

Read Also:Samuel Eto’o: The Passing Of Time Changes Us All, But It Has Improved Messi

“Everyone says we’re the big favourites.”

“I won’t deny that we’re one of the candidates, but we still need some things to be a really strong team.”

Messi’s attention did, naturally, get turned back to his former club Barcelona, where former teammate Xavi Hernandez has taken over as coach.

“Barcelona will grow with Xavi,” Messi said. “He’s a coach who knows a lot and knows the club well.”

For more on Xavi, PSG, and a lot more, keep an eye on MARCA in English on Tuesday for the full exclusive interview.