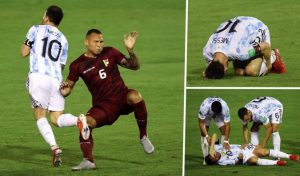 Lionel Messi was so lucky not to suffer a broken leg in the CONMEBOL preliminary clash against Venezuela.

Psg new Man went down after a harsh tackle against Venezuela in a 2022 World Cup qualifier.

Argentina secured the three points with a 3-1 win against the home side in the qualiying match on Thursday.

Lionel Scaloni’s side suffered a nervy moment in the first half of the match,

as Messi felt the full force of Luis Martinez’s challenge.

The 34-year-old was charging towards the Venezuela box when Martinez stepped up to tackle him.

Messi knocked the ball past the defender, but Martinez followed through and his studs were planted into Messi’s shin.

The Paris Saint-Germain attacker’s leg bent backwards and he fell to the ground,

leaving his team-mates and fans nervous about his condition.

Despite the grim tackle, Messi was able to carry on for the rest of the game.

However  the ex-Barcelona hero did not manage to find the net against Venezuela,

as Lautaro Martinez, Joaquin Correa and Angel Correa got the goals for the Albiceleste.