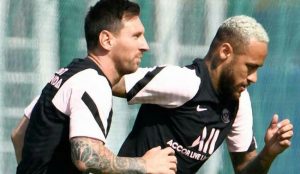 Wait is not over yet for the Argentine star  for his debut with the French giants as he continues to build up his fitness.

Lionel Messi and Neymar have been left out of Mauricio Pochettino’s Paris Saint-Germain squad for their Ligue 1 clash with Brest on Friday.

Pochettino has already privately communicated who will be involved at Stade Francis-Le Ble,

with Messi missing the cut due to the fact he is still getting up to speed after his summer holidays.

The Argentine, who joined PSG on a free transfer following his surprise exit from Barcelona,

at the start of the month, will be joined on the sidelines by ex-Blaugrana teammate

Neymar and Leandro Paredes, both of whom have also only just returned to full training.

PSG supporters will now have to wait a bit longer before seeing Messi in action,

with PSG not due back in action again until August 29 away at Reims.

The six-time Ballon d’Or winner will almost certainly be ready to play a part in that fixture,

Five New Faces To Watch As Serie A New Season About To Kick Off.

having already started full training with the rest of the squad, but will likely head off for

Argentina duty again thereafter as the first international break of the season comes into effect.

Messi, who helped his country win the Copa America in July, originally agreed to sign a new contract at Barca,

after becoming a free agent, but they were forced to announce his departure after a trophy-laden 21-year career at Camp Nou due to their ongoing financial struggles.

The 34-year-old was then snapped up by PSG on a two-year contract,

and he will be expected to help them fight for silverware on both domestic and European fronts when he returns to full fitness.

However, the Parisian outfit will be even stronger this time around as Angel Di Maria,

Marco Verratti and Marquinhos come back into the fold, and Italian goalkeeper Gianluigi Donnarumma,

will be in line for his first appearance since joining the club ahead of Keylor Navas.

Nothing expecting tonight than 3solid points from Pochettino men, to stabilize their leading at the top of the table.