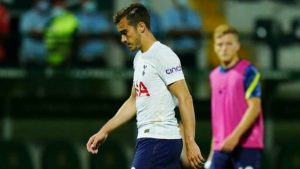 Nuno Espirito Santo’s side lower their chances to get through to the next round after a disappointing displayed in Portugal.

Tottenham have suffered a 1-0 defeat to Pacos de Ferreira in their opening Europa Conference League clash.

Spurs were heavy favourites for victory heading into the first leg of their qualifying playoff against Pacos de Ferreira,

at the Capital do Mpvel Municipal Stadium on Thursday night,

but a first-half strike from Lucas Silva ended up giving the Portuguese outfit a surprise victory.

Nuno  Santo made 11 changes to his side after their 1-0 win over Premier League champions  City at the weekend,

while club captain Harry Kane was absent once again, and they will now have to beat Pacos by two clear goals on home soil in order to reach the group stage of the continental competition.

while permanent summer signings Cristian Romero and Bryan Gil made their debuts and academy star Dane Scarlett was asked to lead the line against Pacos.

Read Also: Jorginho And Two Others Nominated For UEFA Player Of The Year Award

but Spurs struggled to create many clear-cut chances against the well organised Primeira Liga club.

Pacos scored the all-important winner just before the half-time interval,

with Valente Santos finding Silva with a defence-splitting pass and the Brazilian,

subsequently racing through on goal before calmly finishing past Gollini at his near post.

Tottenham dominated the possession stakes in the second period as they pushed for an equaliser,

Also Read: Lewandowski Wants To Secure A Move To Another Top European Club Before The Age Of 35.

but Pacos defended admirably and held on for a famous win which puts them in a strong position heading into the second leg.

Santo’s team will welcome Pacos to the Tottenham Hotspur Stadium for the second leg of the tie on August 26, where anything less than a win will see them exit the inaugural Europa Conference League.

Spurs will only have four days to prepare for the contest too, with a trip to Wolves up next for the north London outfit in the Premier League on Sunday.

Tottenham fans are waiting to see how Nuno side will turn around first leg mess into a victory.