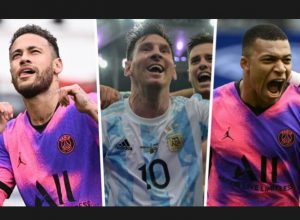 Paris Saint-Germain’s Ligue 1 season may have kicked-off with a 2-1 victory over newly-promoted Troyes on Saturday, but they did so with a team that was notably lacking in star power.

Kylian Mbappe did lay on the winning goal for Mauro Icardi midway through the first half after Achraf Hakimi had brilliantly blasted a debut opener from a tight angle, yet the majority of PSG’s superstar players – new and old – were absent.

Perhaps the greatest of them all in Lionel Messi, meanwhile, has not even signed his contract yet.

Indeed, when Messi does put pen to paper on what is expected to be a two-year deal with the option of one more at Parc des Princes, it will be the moment that confirms that PSG have built the most devastating attacking unit in the history of the game – at least on paper.

The six-time Ballon d’Or winner, widely regarded as one of the greatest exponents of the game, will join forces with the two most expensive players ever. It is a mouth-watering prospect.

It was previously thought that PSG could have either Messi or Mbappe, but it is becoming increasingly apparent that the French outfit will now have both.

With Neymar also having recently committed his future to the Parisians by signing a four-year contract, head coach Mauricio Pochettino will have an attack like no other under his command for a year, at least.

Mbappe is out of contract in June 2022, and there has been little movement to suggest that he will sign a new deal.

Ostensibly, the World Cup winner has been said to be concerned about PSG’s competitiveness on European terms. The club have responded by arming themselves with arguably the greatest arsenal of new signings that any team has ever seen in a single transfer window

PSG have collected an armful of top-class signings over the summer, including Hakimi from Inter, as well as a small army of well-decorated free agents including Ramos, Donnarumma, Wijnaldum and – shortly – Messi.

And yet still the question lingers. When his contract expires, will Mbappe remain with PSG, his hometown club, which is blessed with seemingly endless financial resources, or will he move to Real Madrid, a dream that he has held since he was a youngster, with his bedroom walls having been plastered in posters of Cristiano Ronaldo at his peak?

By all accounts, retaining Mbappe remains higher on the priority list than signing Messi, yet it is the latter that has proven easier to achieve, with the opportunity to play with the France international doubtless one of the draws of moving to PSG.

After all, Messi has suffered at Mbappe’s hand when they have met in the past.

From Mbappe’s perspective, meanwhile, there can no longer be any doubts of PSG’s ambitions with regards the Champions League. However, legitimate questions can – and surely will – be asked about the balance any team with Mbappe, Messi and Neymar all in the starting XI have defensively.

Nevertheless, with three such brilliant forwards in their ranks, PSG will be Europe’s hottest ticket during the 2021-22 campaign.

Between Mbappe’s lightning pace, Neymar’s impish trickery and Messi’s all-round excellence, what they will lack for in physical presence, they will hope to make up for in sheer wizardry.

The uncertainty over Mbappe’s future means that the trio may only play together for a single season – but what a fun season it promises to be.