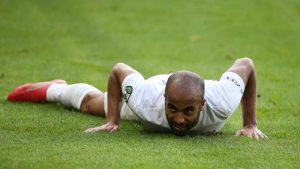 Lucas Moura and Steven Bergwijn have joined Son Heung-min on Tottenham’s injury list ahead of their London derby showdown with Chelsea on Sunday.

Europa Conference League group stage opener away at Rennes on Thursday night, which ended in a 2-2 draw.

Unfortunately, Bergwijn was forced to withdraw on the half-hour mark after,

appearing to aggravate the ankle issue that kept him out of last weekend’s 3-0 Premier League defeat to Crystal Palace.

And, the visitors’ misery was compounded when Moura limped off early in the second half.

Nuno Espirito Santo is now facing something of a selection crisis in attack with Son still battling his way back from a calf injury .

The Portuguese confirmed that Moura and Bergwijn availability for this weekend’s,

meeting with Chelsea is also up in the air during his post-match press conference at Roazhon Park.

“Really painful. Too early to say [for Sunday].

The physios are working with them,”

Santo said, his side’s struggles since returning from the international break:

“It’s been terrible. I must be honest. Let’s not hide behind anything.

“After the Watford game, everything that has happened has not been very good for us.

But, this is football. And we know it’s a moment we have to overcome.

“Today, we tried to show the players solutions, thinking about the game on Sunday.

But, it’s about overcoming obstacles. That will make us stronger for the future, for sure.”

Tottenham took the lead against Rennes after just 13 minutes,

as Moura saw his cross deflected into the net by opposition defender Loic Bade,

but, the hosts hit back via a well-placed curling shot from Flavien Tait midway through the first half.

and eventually got the reward for their pressure when Gaetan Laborde turned home a rebound with less than 20 minutes left on the clock.

However, Spurs responded instantly thanks to a close-range finish from,

Emile-Pierre Hojbjerg and ultimately escaped with a point, with Santo eager to take the positives from a testing contest.

“We scored then we lost control, we played a good team who caused some problems,”

“It is hard to judge the game. I think we finished well.

“Hard team to play, but the attitude was good with a lot of players playi