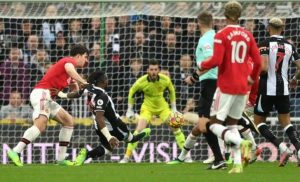 Edinson Cavani came off the bench to score an equaliser for an out-of-sorts Manchester United and dash Newcastle’s hopes of a priceless second win of the Premier League season.

The Uruguayan was introduced after an error-strewn and at times shambolically poor first half from the visitors, during which they conspired to partly gift Allan Saint-Maximin the opening goal.

Cavani immediately added greater threat to a blunt attack, side-footing one effort wide before finding the net at the third time of asking with a poked shot from inside the box.

It was cruel on Newcastle, who defended with determination and counter-attacked with intensity to produce their finest display of the campaign at a vociferous St James’ Park.

Had Saint-Maximin followed up his fine first-half finish with cleaner contact on a shot from point-blank range soon after the break, or Jacob Murphy’s late effort found net instead of post, the home side would likely have the victory they deserved.

David de Gea must also take some credit courtesy of a number of superb saves, none better than the one-handed tip over to deny Miguel Almiron’s follow-up drive following the Murphy shot.

The point is scant reward for the Magpies and leaves them 19th on 11 points, two from safety but having played more games than all their rivals – and four more than Burnley in 18th.

Cavani’s goal ensured that Ralf Rangnick did not suffer a first loss as interim Red Devils boss, but the point does not help them hugely in their quest for a top-four spot.

They have games in hand on those above them, but are seven points behind fourth-placed Arsenal.

To add to Newcastle’s sense of injustice they also lost influential forwards Saint-Maximin and Callum Wilson to injury during the game.