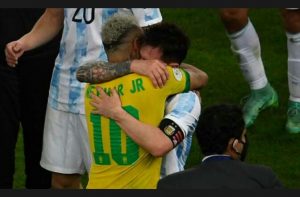 Neymar has sent a worm welcome message to Lionel Messi as the former Barcelona superstar’s arrival in Paris on a free transfer to Paris Saint-Germain.
Messi has chosen to embark on the next stage of his career at Parc des Princes after 21 trophy-laden years at Camp Nou.

The 34-year-old was unable to re-sign for Barca due to the club’s current financial difficulties, and officially announced his departure on Sunday, with PSG subsequently swooping in to hand him a two-year deal with the option of an extra season.

Messi has already touched down in Paris to undergo a medical with the Ligue 1 giants, having agreed to a €35m-per-year contract .

PSG have confirmed the six-time Ballon d’Or winner’s impending arrival via their social media channels, and Neymar has also expressed his excitement by posting a montage of some of the best moments he enjoyed with the Argentine at Barca on Instagram.

The Brazilian, who played alongside Messi at Camp Nou for four years before moving to Parc des Princes for a world-record €222m (£188m/$260m) fee in 2017, included the caption: “back together”.
Neymar initially joined Barca from Santos back in 2013, and quickly struck up a strong relationship with Messi on and off the pitch.
The pair won two La Liga titles and the Champions League among a whole host of other honours together, and helped the Blaugrana clinch the treble in 2014-15 with Luis Suarez completing their fearsome forward line.

Messi and Neymar now look set to form two-thirds of another mouth-watering attacking trident, with French striker Kylian Mbappe expected to ignore the advances of Real Madrid in favour of extending his stay at PSG.