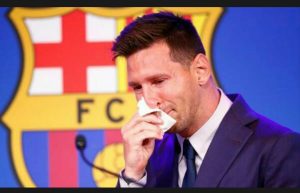 ‘You’re greedy & not the only one’ – Saleh slams ex-Barcelona star Messi over ‘crocodile tears’
Former Egypt and Libya coach Mohsen Saleh has slammed Lionel Messi for his “crocodile tears” at his final Barcelona press conference on Sunday.
The six-time Ballon d’Or winner was in tears while addressing the media where he confirmed that a move to Paris Saint-Germain is a possibility.

The former Pharaohs coach does not buy into the Argentina international’s tears at final Blaugrana press conference, claiming he is greedy

The six-time Ballon d’Or winner was in tears while addressing the media where he confirmed that a move to Paris Saint-Germain is a possibility.

The Argentina international became a free agent following the expiration of his contract with Blaugrana in June.

However, the Camp Nou giants were unable to tie him down to a new deal due to “financial and structural obstacles”.

With that, Messi’s trophy-laden spell with the 26-time Spanish champions came to an end and he is expected to announce his next destination in the coming days.

But Mohsen stated that the 34-year-old could have continued by forfeiting part of his wages to help the Spanish elite division side who are in a financial mess.

“Crocodile tears are when a hypocrite cries despite not feeling any kind of sadness. He in fact feels the opposite way,” the 72-year-old wrote on Twitter.

“Messi, why are you crying when you could have stayed by sacrificing a part of your salary due to the club’s current financial state?

“You’re greedy, and you’re not the only one, you claim you left because of the rules while others claim they left for ambition.”

Messi is Barcelona’s all-time top-scorer with 672 goals from 778 appearances across all competitions.

He also picked up 34 trophies with Barca, including 10 La Liga titles and four Champions League diadems.
Meanwhile, former Real Madrid midfielder Mutiu Adepoju claimed that the player’s departure would be no catastrophe for La Liga.
“Just like every other big player that has left La Liga, Messi’s departure would really be felt. However, that will never be the end of the league,” he told Goal.

“As you know, several great players have come and gone, yet La Liga remains and the quality was never affected.

“When [Cristiano] Ronaldo left, everybody missed him but the Spanish top flight continued because there are several big stars in the league.

“There are so many young players coming up and I believe that another great player would be thrown into the limelight soon.”