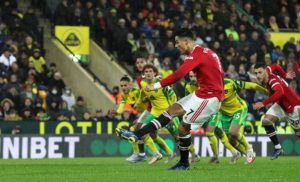 Ronaldo sent Tim Krul the wrong way on 75 minutes after the Portuguese had been hauled down by Max Aarons on the edge of the six-yard box.

The Red Devils had offered little attacking threat before then, though Alex Telles hit the bar with a deflected free-kick during the first half.

They also had David de Gea to thank for two fine stops to deny Teemu Pukki and Ozan Kabak as Norwich put in a spirited display.