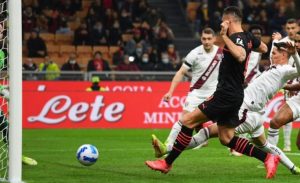 Former Arsenal and Chelsea striker Olivier Giroud scored the only goal as AC Milan beat Torino to take Milan to the top of Serie A.

Giroud, 35, scored from close range at the back post after good work from Rade Krunic after 14 minutes.

The France World Cup winner, who joined Milan after his Chelsea contract expired at the end of last season, has scored four times in six league games.

Milan are three points ahead of Napoli, who play Bologna at home on Thursday.

Tommaso Pobega had a chance to equalise for Torino,

but headed wide early in the second half and substitute DennisPraet, on loan from Leicester City, also missed an opportunity late on when his effort clipped the Milan crossbar.

Their highest finish since 2011-12 – and they have won nine and drawn one of their opening 10 Serie A matches this campaign as they push for their first league title since 2010-11.

Milan are next in action on Sunday with an away game at Jose Mourinho’sRoma, who are fourth in the table with 16 points from nine matches.